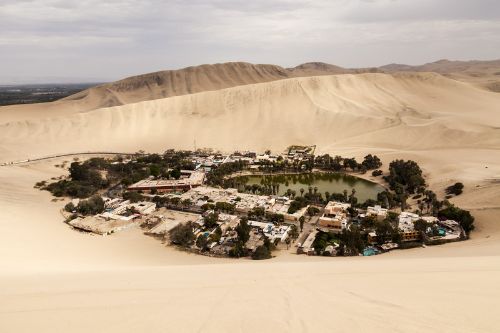 "If there were a planetary catastrophe and I had the possibility to choose a country to save and reconstruct the planet, without a doubt, I would choose Peru"

David Bellamy´s words - far more eloquent than mine, but I would have to wholeheartedly agree. We have been in Peru for just ten days, and already the sheer diversity of this beautiful country is very clear.

We awoke from our nightbus in the very north of Peru, and after a few more hours journeying south we had reached the charming city of Trujillo, which sits baking amid sandy plains and purple rocky outcrops. Our next stop was lofty Huaraz, set amongst towering snowy peaks in the Corillera Blanca. We´d been told not to miss ´Laguna 69´, a glacial lake 5000m up in the hills a few hours outside of the city, so we hooked up with our new mate Frankfurt Mo and his three French Fillies for a hike. We hadn´t quite appreciated how hard it would be at this altitude and nearly gave up once or twice. But of course, it was worth it in the end - water coloured pale turquoise by rock flour fed by tumbling glacial waterfalls. Stunning.

Our third nightbus dispatched us to Lima, which we bypassed in favour of the coastal desert of Paracas, a few hours further south. What a place! The visitor centre says that although Peru´s ocean represents just 0.1% of the surface of the ocean, it provides 10% of the world´s fisheries. The coastline and nearby Ballestas islands are home to penguins, sea lions and myriad bird species. The town of Paracas itself is charming, friendly and relaxing. There is a palpable feeling of repair and rejuvenation here after 2007´s Magnitute 8 earthquake that devastated the area. It is well worth a visit despite being completely overlooked in our trusty guidebook!

Next we spent a few days relaxing at the surreal oasis of Huacachina (pictured), nestling in enormous sand dunes near Ica. Relatively unscathed from sand boarding and dune buggying adventures (terrifying but blooming marvellous), we hopped down to Nasca for an unplanned flight over the lines. They were not in our itinerary (or budget), but we couldn´t resist them after the calibre of ruins and archaeology elsewhere in Peru. It´s amazing that a) no-one noticed these enormous geoglyphs until the 1950s, and b) that we still don´t know why they are there. This was almost as exciting as glimpsing the world´s highest sand dune from the plane, ooof.

Yet another nightbus, and we´re now in lovely Cusco, a fabulous city full of beautiful architecture and far too many tempting trinkets. Our last-minute Inca Trail trip begins tomorrow and will no-doubt boost some of the travel ratings, currently weighing in at: