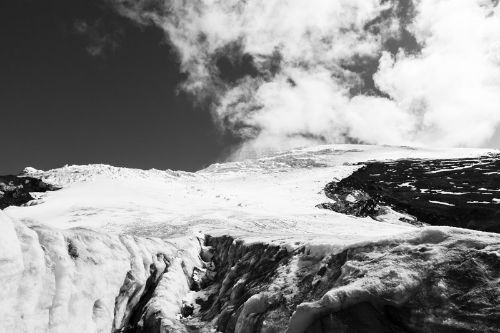 First off, thanks for your messages - it´s ruddy lovely to hear from you, and we are missing you lots.

Since we left Galapagos we´ve been mostly traversing the Ecuadorian Andes by bus. First stop was Latacunga, from whence we walked (panted) up to Volcan Cotopaxi´s glacier at 5000m. Nothing works properly at that altitude! The clouds parted for us as we neared the top, and closed in again as we descended; clouds have been a familiar theme with Ecuadorian volcanoes. Baños saw our second attempt at getting a decent photograph of one, which involved hiking up a stupidly steep road for two hours to be greeted with cloud and a small glimpse of the majestic Tungurahua. I was thrilled; Jed was not. Safe to say I didn´t drag him up Chimborazo (the summit of which is further from the centre of the Earth than anywhere else on the surface of the planet). Next time! We never did get to see Tungurahua in her full glory because we were evicted from our hotel the night before our planned re-acent to the view point. We´re not sure why...

Baños did however make for a very restful few days and a base for a short excursion into the rainforest. It also provided a much-needed opportunity to learn some Spanish! Eight hours of lessons later and we´re still pretty terrible, but we can just about communicate with the locals - essential for uber-sociable bus journeys. Ecuadorians are so friendly! On the Loja-Vilcabamba bus yesterday, one chap made a beeline to the back of the bus to shake our hands and tell us about Vilcabamba and its (very beautiful) surroundings. Soon after, Jed´s face was cushioned between the breasts of an Ecuadorian lady for a good few sets of hairpin bends. I´m over it.